I'm Bob - welcome to the bunker! You may know me from the band Big Medicine Head or daytime television.  This seasonal missive from the land of tumbleweeds and the lonesome six string guitar features news from the frontier, music and prose. Each issue will have a downloadable track and lyrics, along with the backstory of the song. For the duration of the pandemic we'll also feature live songs from the bunker. Call me crazy, but I'm giving all this away for free.

If you'd like to revisit past issues of Tales of the Western Hemisphere you can find them at bobgemmell.com.

S O N G  o f  t h e  M O N T H
Sit back and relax as we explore the Bob Gemmell and Big Medicine Head song catalog. The download instructions are at the bottom of this newsletter.

When new music drops I want you to be the first to hear it. Just in time for the holidays my new track Saint of Everything has arrived!

I wrote Saint of Everything as an attempt to capture the sense I had of the pandemic, one year in. One might expect that to be a bit of a drag - a bit heavy. To the contrary, this song bounces along throwing garlands of flowers and sprinkling fairy dust, with a message of measured weariness but certainly of hope. Noteworthy perha

ps is that while the usual suspects are here (mandolin, guitars) this is my first attempt at recording myself on lap steel and violin. The kicker - the element that allows this song to rise into the ether - is the vocal styling of Lee Takasugi and JeffyD. They are the creative artillery behind the pop sensation Tigers and Airplanes. When they sing I stand to one side and hope that my instruments don't get in their way.

Every year when the holidays come something takes over in me. Whatever despair or dissension I've been feeling melts away, and as the season progresses I'm more and more aware of all the love and beauty there is in the world. I'm aware of the way we're all connected to one another.

So, for the fall edition of the newsletter, I offer this song as a big shiny hug to everyone I've ever met, and everyone else. Thank you for being along on the ride.

Have you heard the news?
we burning all the calendars tonight
a bonfire of our blues
we’re crawling to the light

"Every now and then, or perhaps only once in a generation, an individual walks in from the horizon, backlit by the blaze of sunset, and offers an example of excellence and gravitas for all of us to contemplate and emulate, if we can. This individual will have a grimace and will squint directly into the sun, as all the best cowboys do."

"In these troubled times you've got to step into your salvation boots and get to walkin' down the road. If you know how to whistle, do that too."

The Legend of Bryan Evans

I met Bryan Evans in the second grade. We were eight. Even then his aesthetic was as sharp as the razor an assassin might carry in his boot. While other kids were entertaining themselves with GI Joes and Mary Poppins, with dreams of being firefighters and race car drivers, Bryan's fascination was with ornithology, the film oeuvre of Stanley Kubrick, and art. From the time he picked up a pencil he sketched what he saw in the unadorned light that hit his retina and flowed to his hand in a way that committed truth to canvas. 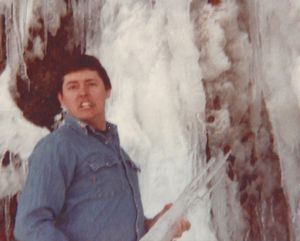 As we grew up my cerebral development could be measured by the time I spent verbally jousting with Bryan. Always collegial, but with tremendous gusto. I remember his mom being concerned by the energetic discourse coming from his room.

Our spirits were connected by our inclination toward the irreverent and the absurd. We read Hunter S. Thompson and absorbed his vibe. In high school we were not drawn to the clubs and social group one might expect from teenagers trying to acclimate into the suburban landscape. We struck out on our own, and with our pal Chris Fiscus held court during the high school lunch hour at our adopted headquarters, a rummy fast food restaurant called The Potato Pit. There we created our own religion (The Church of the Latter Day Space Rangers) and our own bible, (The Old Teachings of Frank). Frank was a halloween mask that we bought at a drug store in Truckee on a road trip.

After high school - while we tried to catch a ride on the rolling boxcar called adulthood - Bryan and I had adventures. 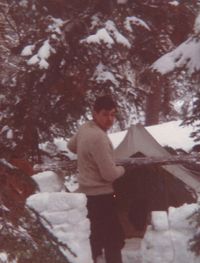 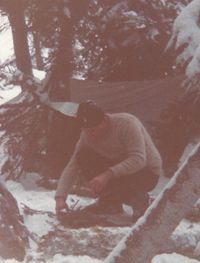 road that meanders through the country between Sacramento and Jackson. We rode our motorcycles on hot days, passing each other performing feats of escalating risk. I would pass Bryan riding side saddle and he would pass me standing up on his seat. I would respond by passing him standing on one leg, pirouetting as rolled by. He would respond by taking his hands off the grips entirely, arms folded and grinning from ear to ear.

Bryan has an affinity for the places in the world where safety is not always assured. I'm reminded now of the time we snowshoed into the Mt. Lassen 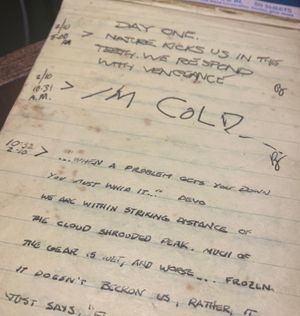 wilderness with backpacks and a shark knife. We used the blade to carve ice blocks out of the snow pack and built an igloo. We slept that long night in sleeping bags that we discovered were nowhere near rated for that level of hellish cold. We kept a journal.

At an age when we should of known better we found trouble in the most creative ways. One night we were playing our electric guitars by the swimming pool at my parent's house. When my dad expressed his displeasure, we went looking for a place we could plug in and continue to play . Why we thought it was a reasonable solution to drive to a gas station that was closed for the night, unplug the Coke machine and use that power outlet to power our guitar amps I don't recall, but at that time it made perfect sense. Until the cops arrived... 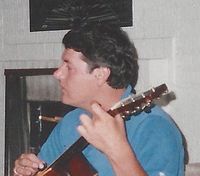 Bryan plays the guitar the same way he wields a pen, a camera or a paintbrush: sharp, focused, unforgiving. And fast. Lighting fast. He plays licks with mathematical precision, moving through scales with fury and ruthlessness. He would be perfectly at home in a Steely Dan recording session. 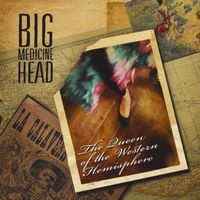 It is the visual arts, however, where Bryan's brilliance is most evident. As a favor to me he took a simple photo of Isabella Kressman dancing and turned it into the masterpiece album cover for Big Medicine Head's second album, Queen of the Western Hemisphere.  I could dump all sorts of adjectives trying to describe his portfolio, but you should probably view it for yourself. The repository for Bryan's creative output is at buginbox.com.

Bryan attended the Art Center College of Design in Pasadena where he was elected student representative. Bryan developed his animation chops and somewhere along the way he turned pro. He worked on several Emmy award winning shows and shorts including Tazmania, Marvin the Martian in 3D at Warner Bros Animation. At Disney Bryan worked on several tv shows, and got an Emmy nomination for directing a show for One Saturday Morning on ABC during the Eisner/Ovitz/Katzenberg era. He spent a chunk of years at Nickelodeon on several production shows, shorts and development, including Avatar, The Last Airbender, and Penguins of Madagascar. Along the way Bryan worked for Dreamworks, Apple, and Netflix.

There was a stretch of time when Bryan w 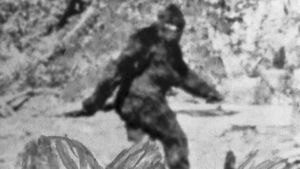 as lost to us all. Not much is known about this period. It is said that he fell in with a group of cartographers that dwelled on the rim of society. What did he see there while living the life of the intentional hobo? The rumors of metaphysical exploration and an inclination toward ever higher levels of risk abound, but this is a period Bryan does not discuss. We know that he adopted the moniker Victor Von Reisling during this time, but we know little else.

In the end perhaps we're better off with the scant knowledge of Bryan Evans' lost years that we have. We'll leave it at that, but I'll add that whatever flavor there is in my own creative output is informed by the years I spent in common pursuit of esthetic truth with Bryan. We should all be blessed to have a friend like that. 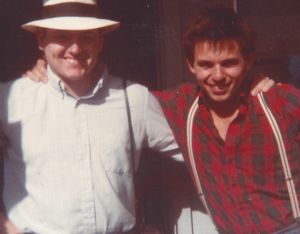 America, After the War is blowing up the internet - the highest views and likes we've ever received on YouTube and Instagram - check it out here. 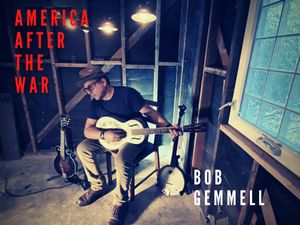 The holidays are as much about festive meals as anything else. Here's a recipe to help you entertain your reprobate friends.

Saint of Everything (original recording)

The times are weird, and getting weirder. The solemn halls of the capitol are filled with charlatans and carnival barkers. Science and civility are now myth. The voices of doctors have been drowned out by podcasters. My hat is off to you if you can turn on your television and not feel like you need to take a shower. And yet...we're going to get through it. Perhaps we're marching backward into the future, but we'll get where we need to be.

After turning knobs and layering instruments for the new single I thought it would be interesting to include in this edition the original recording: just me, a mandolin, and some expository narrative. Click the image above (or on the photo of me and Rex) to listen.